Who Makes Schwinn Bikes? Are Their Mountain Models To Be Trusted?

Growing up, Schwinns were all the rage. We all wanted one and would save up our pennies to get one.

The day finally came when we could afford our new Schwinn. We proudly went to Walmart and bought it.

I was part of that tribe. My grandfather was so proud of me. He too had saved up his paper route money to buy a Schwinn.

Now he and I were “bike brothers”. 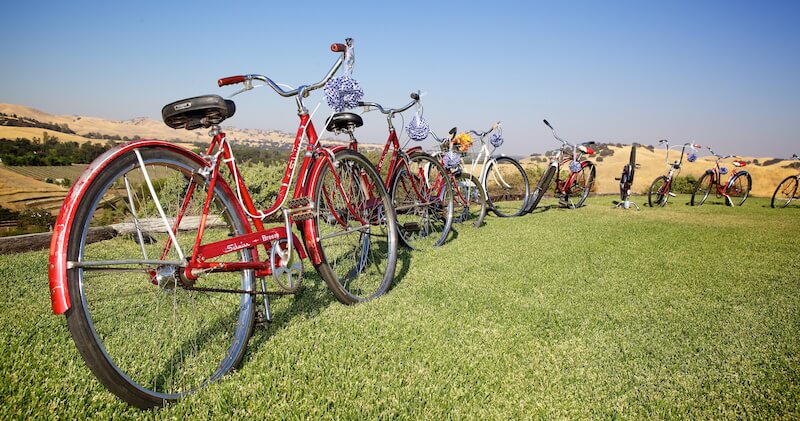 I don’t know about you, but I, I was sorely disappointed. The bike was cumbersome and slow, and the shifters worked like poop. (I’m assuming here that poop doesn’t do much work)

It wasn’t the awesome ride my grandfather had described. In fact, a few months later the Schwinn was pretty much unrideable. I could only get it to shift into a few gears, and the brakes were rubbing.

All too soon the bicycle was sitting in the corner rusting.

I found a used Cannondale for a fifth of what I had paid for the Schwinn. I bought it and fell in love with cycling.

(I would find out later than the used Cannondale had a seriously worn drivetrain. It still worked better, and I rode just over a thousand miles on it. )

Several years after my bad run-in with the brand, I got a job at a bike shop. They were the local Schwinn dealer, and that brand name kept the customers coming in.

I was confused. In my experience, they were one of the worst brands out there! Now I was supposed to sell them?

That’s when I began understanding their history.

In the 1950s Schwinn became one of the first US-based bicycle manufacturers to put their brand on their bicycles.  Until then, most of the manufacturers were simply creating bicycles for retail stores to sell under the store brand (ie. making a “Sears” brand of a bicycle or a “Joe’s shop” brand.)

This shift allowed them to build their brand instead of the store’s brand. A small, genius move that put them at the front of the industry.

This brand building continued to grow despite Europe’s growing influence on the market. While most of the serious aficionados went for the lighter, faster, imported models, the average American found their brand loyalty rewarded with a sturdy cycle that was built to last.

In the 1960’s and early 1970’s the brand building efforts paid off with the launch of the Stingray model. Suddenly, every crew cut boy would have nothing else. The Stingray model hooked these young pedallers in for life.

Their road bicycles served to solidify further their market position. Not only could parents buy their kid the snazziest bike on the market, but the parents could pick up a couple of skinny-tire road bicycles that were faster than anything they had ever seen.

And, in my case, it became a multi-generational loyalty.

At the end of 2001, after nearly 20 years of fighting unionization of their United States factory workforce and marketing invasion by foreign-made bicycles (and slowly losing more and more of their manufacturing overseas), they succumbed to their losses.

In September of 2001, Pacific Cycles purchased the brand at Bankruptcy Auction.

Pacific lost no time in capitalizing on the brand name. Unburden by the history of the Schwinn family; Pacific had no reasons to try to maintain over-priced US factories or to preserve the brand name by avoiding mass production.

Through a series of licensing deals, the brand was spread over several products. Best I can piece together; there are now two types of Schwinn bikes.

Signature Series: This is the “high end” line of bicycles that are designed for independent local bike stores to sell. In my experience, these are a little heavier than similar models by other brands such as Diamondback, Specialized, Trek, and Giant. But they use high-end components and compete in this space. (Especially when they are on sale!) Overall, they are a good-quality option.

Discount Models: These bicycles carry the Schwinn logo but are produced for mass-market sales in your local box stores. These are pretty much the bicycles you see at Walmart. The quality is lower, but then, so is the price. You get what you pay for. For the casual rider who gets their bicycle out a few times a year, these models are an excellent choice. However, this version of a mountain bicycle would be a poor — if not dangerous — choice for serious off-roading.

Fitness: Pacific Cycles sold off the fitness equipment line to Nautilus, maker of the popular Bowflex machine. So when you see the Schwinn logo on fitness equipment such as treadmills or their Airdyne stationary bike, it is likely made — or at least sold by — Nautilus.

Confusing the issue is that I have seen Signature and non-signature bicycles side-by-side at places like MC Sports. Maybe it was a short-lived thing. Maybe it’s their new way of doing business. I don’t know.

It just makes it much harder for the customer to know that they are buying a high-end bicycle that is worth the money and that will last.

In my experience, you typically find the Signature series cycles to be very similar to other medium-range competition. You can pretty much do a spec-by-spec analysis like we do here at Dave’s, and get a good idea of which model to go with.

See Also: Get The Right Bicycle For Your Height

Throughout several of our reviews, we recommend the Schwinn and do so wholeheartedly. It’s our experience that they can still make a great ride. But you will likely need to either buy it online or at a local independent bike store.

Just be careful that you aren’t just paying for the logo. Unfortunately, because there is such a range in the quality of bicycle produced, the logo is not a guaranteed seal as to the level of machine you are buying.

I would buy and trust a Signature Series, but not one of their other, low-end models.

Schwinn is well-represented online, and there are a lot of places where you can purchase them. Most of us have ordered from e-commerce sites like Amazon.com or REI.com before, and those are as good of places as any.

If you are lucky, you might have a local dealer near you, which is ideal as you can purchase their Signature Series models already assembled with a full warranty.

As a side note, these guys also make a half-decent saddle.

There is a large number of these available on the used market. I get asked to provide a valuation for them on a regular basis.

Sometimes a serial number lookup tool can help you get an idea as to the year, and then from there, you can work on eBay to find a valuation for what the bicycle has been selling for.

Some of the older Stingrays and Worldsports retain a little value, and I’ve heard that the cruisers with a kickback shifting mechanism are the most valuable (but I’ve been unable to confirm that.).

In most cases, these old bicycles are not as valuable as you might expect.

However, they do fix up nicely and make great cruisers for getting your daily cardio exercise in. If you can find one in your size, and then put new tires and brakes on it and lube up the chain, you can probably get a lot of riding out of it. My rule of thumb is to pick it up and make sure that it is not excessively heavy. I’ve gotten lucky a time or two and found some older, yet lightweight models for my friends to ride.

Typically I pay $30-$50 for them, depending on how many repairs I expect to perform.